.....Yeah....ummm......I never did go get the artificial tree from the attic.  I have a very nice, prim tree, a very BIG german twig tree but I just wasn't feeling the "fake" tree this year.

So, there it was, two days before Christmas Eve and I had no tree.  It was bitterly cold that morning, I was contemplating my tree dilemna as I dressed to go across the road to the barn to feed the stray kitties.  This is a whole other story!  Do you know, we feed these strays, twice a day.  They are currently residing in the very bottom of our small barn.  We heat milk for them and bring them their food.  Kinda like room service!
ANYHOW, I thought since I was going out, in the snow and wind to feed them, that I would look in the field for a tree.....a small tree, since I didn't know where the Mr. was keeping the saw.  So, I grabbed a steak knife, Yes, a steak knife, and headed out.  I fed the cats, and them tromped thru the field thru the wind and snow until I found a little grove of the most pathetic trees you could ever see!  BINGO!  I couldn't decide, I eyed them all from every direction, finally deciding on one with a trunk I thought I could take down with a steak knife!  LOL  I "sawed" and "gnawed the trunk from every direction but I think it was frozen.  Got down on my knees in the snow and "sawed" away.  I'd saw some, then pull the tree some and then saw more on another side.  Finally there was enough that I could pull the tree over and snap the trunk.  I dragged my tree to the house, carrying it up the driveway easily because it was so light as there just wasn't much to it.  I was almost to the house and my daughter-in-law opened her back door at just that moment, took a look at my tree, and exclaimed, "What are you doing with "that thing"????

I tried to hide the steak knife but she saw it...........(I've been the brunt of many a joke over the past week)
Anyhow, I told her she would see, it would be great.  Major eye-roll here.  I got it in the house and then devised a way to make it stand, in water, inside my giant crock all without a tree stand.  I'm not even going to go into that because you all would think I've lost my mind at this point but, I did get it to stand!
Poor thing, it didn't get decorated until Christmas Eve day, I had to let it thaw.........and it was subject during this time to ALOT of ridicule.

However, I did decorate it.  I did not use any of my normal tree decorations except for the lights.  I then added dried orange slices, and these plastic icicle ornaments from the 1950's that I've never used until now.  I then strung two bags of cranberries and added these to the tree.  It needed something more.  So that night I made these big gingerbread cookies and when they were cooled, I strung them on red cording and hung them as well.

I love my tree.  I hate to take it down but it does need to go now.
This is the best picture I could get of it, my camera really is not cooperating with me lately but  you get the idea!! 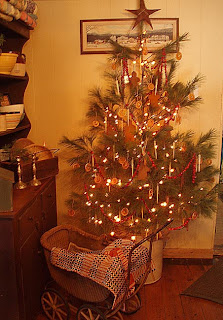 Might have to do this next year as well.....maybe string some popcorn then too.
Posted by Maureen - sweetmeadowsfarm@yahoo.com at 8:47 AM

aww I like your tree! LOL about the steak knife. I used to use a drywall saw. It's like a big steak knife. I always used it on the trees, worked great! Need to get me another one, not sure what happened to the old one.

Our tree is still up, won't take it down till after the New Year. It's a real tree, still green and not totally dried out. Still smells good too!

Oh how you tell stories, Maureen. I enjoyed reading your lil tree story. You made me laugh.

In the end, I love your tree. It is beautiful and you will definitely have to do it again next year, but next time, make it easier on yourself and take a saw ;)

Have a great day.
Tonya

I love your tree, I think it looks just fine! I have used a big fake tree for years and I kind of miss the real thing. I think you did a great job decorating it, too.

OMG~I love that tree!! I may have to copy your idea for next year (minus the steak knife LOL). Love the story of how it came to be.

Wow Maureen...you gotta find where your hubby keeps his saw!! I looove your prim tree, it's gorgeous!
patti

Your tree is so "Primlicious" Mine was a tahoe tree and I get made fun of for it...I asked my deer hunters in the family to bring me back a dead tree with no needles on..Well no deer and no tree...they thought I was nuts....Always next year...lindeelou

LOL I love it who says we can not make things happen!! And it looks lovely and even more so because of what you did to get it!! I like real trees and cutting them down, hunting for the one you want!
Makes it more simple and the decorations you used are perfect.
Brenda

Maureen I agree it would be hard to take her down, the tree is lovely. I just wonder what type of steak knife you have!!!

LoL..I can just imagine you trying to cut it down with that steak knife.Toooo funny.Here I would have attempted it with one of my hubbies antique butcher cleavers.It turned out prim perfect though.I relly do think it's a wonderful tree.Warm Blessings!~Amy

Robin at The Primitive Hutch said...

Love the tree, you did a fantastic job. I'm glad you didn't cut yourself with that steak knife. (that's usually what happens to me)Thanks for sharing!
Prim Blessings! Robin

I love the tree. Love those decorations. Great tree story.

Are you sure we aren't the same person? Ever since Thanksgiving my 10 year and said we were going to walk around the property and we were just going to cut down a scrub pine(Charlie Brown) and that would be it. A friend of mine ended up bringing us this huge tree from her hardware store, so we didn't get our Charlie Brown. Next year we are just going to keep it quiet and go find one! Oh and I always have a large steak knife in the car, I am always on the side of the road sawing something. We make our swags etc. But it works best on the Bittersweet vines!! Merry Christmas and a Happy New Year

girl you're so funny! the importamnt thing is that you showed love to a tree& made it beautiful lol!
Helen

to me..this is Christmas..not perfect..but just right! LOVE IT!
Cyn

LOL!!
What an awesome memory you made.
I love the story and the Tree!!

Maureen, I love love your tree! It's perfect! I can see why it's hard to take down. So pretty.

I think that tree looks great!

Hello Maureen, your tree is somthing Queen Victoria herself would have been proud of and so should you :-)
Just wanted to say, you are one of the inspirations for me starting a blog for my work , i have made and restored Rag dolls and bears for years and have always been a huge raggedy fan ,thanks to my Nan's influence when i was little, i feel it's time to take this wonderful creative passion to the next level and share some of my creations, i don't see hardly anything this style here in the UK, and love peoples faces when they see my stuff, please check out my website and blog at www.rag-dollhospital.com ,please Keep up the fantastic work :-)
Cheers
RS x

Links to my stuff!

Maureen - sweetmeadowsfarm@yahoo.com
PA, United States
I am: A Wife, Mother, Grandmother, Artist. I am a child of God. I reside in the Endless Mountains of northeast Pennsylvania with my hubby. There's no better place on earth to be in the summer but, the winters......well, that's another story. I come from a line of STRONG women. Sadly, 2011 I lost both my Mom and my Grandma. It's been a tough year but I know what my Mom would expect from me and so I carry on with the help of family and my heavenly Father. I love sewing, gardening, but most of all, God and my family!